Few movies make space in your heart in a while. It is not usual that you get to see amazing and life changing movie every weekend. It takes a long course of time for creators to create such work of art. Today let me show you another life changing movie that will thrill you and will give a new perspective to see your life and around. I will say this movie is a must watch movie before you die.

“Ankhon Dekhi” movie directed by Rajat Kapoor takes Hindi movie to another level. “Ankhon Dekhi” is a Hindi term which refers to that what you see with your eyes. The protagonist of this movie is someone among us. He resembles our own image in silver screen. This character lives regular mundane life as we all do. Believing all that what is said to us. Uncountable things around us are such and such because it is so for ages. No one questions the existence of that believe and reason behind it or the significance of it. Life silently passes by us when we are too busy making plans for tomorrow. In times when the art of survival has overtaken the art of living, some different phenomenon happens around us. That is what shown in this movie.

Our social norms and values often direct our actions and beliefs. Day in, day out, you try hard to fit in. Who do you think would want to come across as ignorant, odd and a prude to the judgmental lot after all? Osho often tells that It’s easier to agree with the majority, hold our heads high and ego higher. In doing so, we lose out on discovering who we really are. Right from the childhood, we are trained to follow what’s been told to us. No questions asked, no risks taken. The film’s protagonist Bauji (Sanjay Mishra) faces this dilemma. As it is said in Sanskrit “Samsara” a wheel of life binds a person with the burden of duties, responsibilities and worldly desires forever. It’s the spiritual knowledge which only can liberate one from this wheel or circle of trouble.

An incident in his daughter’s life leads him to a path of self-discovery and forces him to only believe in what he sees. But can you sustain these idealistic visions in the real world without being tagged either ‘crazy’ or ‘saintly’? Sanjay Mishra the protagonist of this movie paves a new path of enlightening him by taking decision to believe only that he sees with his naked eye. That’s where movie takes you to a new level. You start realizing and you also start asking yourself; what about me? Am I on the right path or I am also following the same bitten path walked my main stream of society.

This movie of Rajat Kapoor is thought-provoking, he touches a chord. His satirical take on how everyone conforms to the herd mentality is relevant and praise-worthy. It inspires us to unlock the shackles of mediocrity and standard behavior – comprising of what’s right and wrong, true or false. What we liked the most about this film is its old Delhi setting. It is as authentic as it can get and contributes immensely to the film’s emotional quotient. The intricacies of a joint family have been explored beautifully. In fact, this track works better than the one revolving around Bauji’s spiritual epiphany. Sadly, the latter gets more prominence. The performances are another asset. Sanjay Mishra and Seema Bhargava (as Bauji’s wife) are flawless. They infuse life into the story. The younger actors are impressive too and thankfully, not a single character’s loud and Bollywoodised Punjabi, unlike many Delhi-oriented films. What however doesn’t work for the film is the fact that it borders on abstract at regular intervals and lacks continuity, making a few scenes and conversations seem out-of-context. Movie liberates your soul and gives you courage to walk out of the old bitten path and make your own way in life. I will strongly suggest you to watch this movie and share it with your friends too. 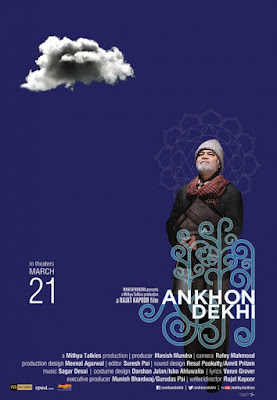 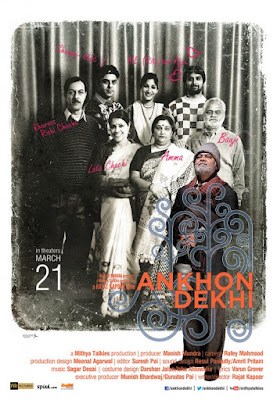 Here is the trailer of this movie:

Note : While saying so I want to confirm I am not being sponsored or supported in any mean to promote this movie. I am recommending you the movie from my own knowledge and perspective.
Posted by Suvas Agam at 12:02 No comments: