Representation of modern man in Samuel Beckett's “Waiting for Godot” 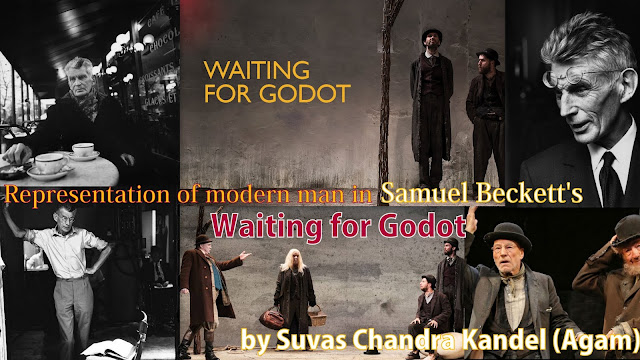 This paper explores the state of modern man presented in Waiting for Godot by Samuel Beckett. Moreover, the study highlights Beckett’s depiction of man’s belief of waiting for his survivor to come for his help. Beckett juxtaposes modern human psyche with hope or pursuit of happiness in one way and in other way he shows the absurdity of human life. Beckett presents two major characters Vladimir and Estragon who go on waiting for Godot. They represent today's human psyche. If we go into the street of any city we can see everyone running, fighting or craving for the same Godot but actually they also don’t know what he/she/it is. But everyone is just behind it; waiting for it or dreaming to attain Godot. In this sense we all are Vladimir and Estragon. Therefore, here in this writing I will show how Beckett appeals to this modern time with his writing from the twentieth century’s writing.

At the turn of the 20th century, a crisis in Enlightenment humanism had began to emerge; from the ashes of a dying romantic era, a cultural revolution known as the modernist movement arose as a progressive force promising to liberate humankind from ignorance and irrationality. Weary from the weak, unchanging patterns of Victorian writing, a collection of writers sought to break away from pre-existing ‘dead-end’ methods of creating literature by exploring new styles which were expressed in their prose and poetic works. Placing a greater emphasis upon experimentation, modernist writers took a great interest in purposely disorientating their readership with fragmentation and elements of the absurd.  As the play is postmodern writing, it centers on the theme of meaningless life as Julie Armstrong suggests, "The essence, therefore, of post-modernity is that there is no essence" (98). A conscious experimentation with language to express both its powers and limitations became apparent components in a vast body of modern literature. While the previous era embodied a strong connection to nature in the belief this relationship was crucial for man’s development as an individual, modern writers displayed little interest towards the natural world. Instead, an established vein of modern thought developed that progress as an individual was dependent upon directing the eye inward.
One particular modernist who became fascinated with the idea of the individual and perception was to be the Irish playwright, Samuel Beckett. A key piece of his work which has been heralded as a defining piece of modernist literature is his abstract play, Waiting for Godot. Frequently noted for its minimalist style, Beckett’s absurdist play has invited a multiplicity of possible interpretations. While Godot does technically still reside in the ‘modern’ bracket of literature, elements of a postmodern nature can also be subtly detected within Beckett’s work; the characters of Vladimir and Estragon for example, have been noted to resemble the tragic comedic figures Laurel and Hardy, as their methods of ‘passing the time’ act as a pastiche to classic American Vaudeville routines. The play thus appears in what Robert Scholes states, Beckett's play "challenging traditional forms of theatre, they ultimately challenge traditional view of human existence, suggesting that it may be as illogical, as absurd, as the dramatic spectacles they portray" (1272).
For writers who use absurdist techniques, the world is incoherent, illogical, nonlinear, and  irrational. The laws of cause and effect don’t operate, language ceases to have any inherent meaning, numbers and places are only arbitrary, and it all winds up being so horrible you can only survive by laughing at the absurdity of trying to find meaning where there is none. (240)


Within Beckett’s play, a palette of primarily modern features can be identified as the two primary protagonists await the arrival of an absent character named ‘Godot.’ Awaiting this absent person, Vladimir and Estragon perform an array of activities to pass the time, from silly things such as playing games and swapping hats, to darker matters such as contemplating suicide. Vladimir and Estragon resemble the activities of modern man in the play. Today’s man is also waiting some unknown in his or her each and every action. From buying a latest model of mobile, car, cloth or any artifact, there is always a craving of that unknown Godot. That Godot, who never comes in any good. But we go on seeking shadow of Godot in our each and every action. Parents grow children in the hope that one day they will arrange a meeting with that Godot. So, they send them school so that they will find some way to know Godot. They go to college, get married, do job, give birth to new generation and go on hoping one day they will meet Godot and be happy. But that Godot never comes. Human grows old and finally in death bed also he/she hopes till last breath of have a small glimpse of that Godot. But no one ever got any chance to meet Godot. So, the characters of Waiting for Godot not only resemble the story of every modern human but it mocks on the existence of meaningless repetition of same waiting since time immemorial. Because of this endless repetition today human has reached to such a state that he/she even doesn’t notice the fault on doing so. It has become a ritual of life. “Everyone does so, so I do it.” That’s the answer of each individual. Beckett artistically depicts that true picture of modern man in this play. Between Waiting For Godot  and The Myth of Sisyphus,  we learn a little bit about the redundancy of our lives; "Habit is a great deadener."  Vladimir states near the end of the play.

Human in many ways has become puppet in the hand of system created by big multi-international companies, corporate organizations, big companies and brands. Human follows the trend which actually is just a conspiracy against him. Unknowingly he goes to the market and asks for cold drink and gets coca cola and drinks even though he probably was thinking to drink water. But water is not banded as coca cola till today. Human mind is poisoned by the slogan such as “cold means coca cola” and many other slogans which actually is poison against the free will. We are not free in this sense. We go to market and by only those things that are popular, or are advertised. We never buy the advertised cheap things. We rather buy expensive things but don’t relay in not advertised thing. In this way, we all are hypnotized to act, be and react in certain order. Because of so many stimuli in the city people develop blaze attitude and alienate the being of individual. Because the city is so impersonal and objective as Georg Simmel, German sociologist, philosopher, and critic even sees a "regression of the culture of the individual" in his era, where individuals try extra hard to be unique in whatever ways remain open and haven't been legislated or subordinated to economic efficiency.
From one angle life is made infinitely very easy in the sense that stimulations, interests, and the taking up of time and attention, present themselves from all sides and carry it in a stream which scarcely requires any individual efforts for its ongoing. But from another angle, life is composed more and more of these impersonal cultural elements
However, Vladimir and Estragon are in a complete state of unconscious and uncertainty because they do not have the knowledge about Godot. They do not know where they are going to have a meeting with Godot. They know nothing about Godot except the “white beard” (37) Godot has. Belief, knowledge and experience give justify man’s indications to his religion. Vladimir and Estragon have bad faith of coming Godot for their salvation. Vladimir and Estragon are identical to each other as if they are identical to all human kind. Lucky and Pozzo also are interconnected with each other with a rope. There is not any specific relationship between the characters of Waiting for Godot. As if they are representing other part of humans who have their own pain and sorrow and have no hope of any one to come and give salvation to them. They are in the same relationship in which all human beings are tied to each other. Beckett’s religious quest is clearly shown when both of his characters in muddle ask themselves that why are they here? They did not get answer instead of their consistent attitude towards their waiting for Godot. One more thing is noticeable in Beckett’s play that there is no escape from their life except having belief on their salvation according to their deeds. Despite Pozzo becomes blind, Lucky did not flee. Beckett does not show the way to escape humanity from their solitude, but he wants his characters to stay there in same estrangement and keep on waiting for their savior. All the characters of the play are not living in their selves but they are dependent and interconnected to each other and are not free and independent.
In conclusion, the play depicts the modern man seems to be free in nature but he does not let him free from his worldliness. This play depicts the condition of modern man and is a mock. He becomes again a slave of his desires and materialistic attitudes due to which he makes a distant between him and his divine power. The more man becomes materialist the more he gets away from his self. Chaos and despair would be found everywhere as it is depicted in Beckett’s play. In the play, the two vagabonds are in a continuous wait for Godot, the survivor to come and save them from ultimate disparity and desolation. It is their belief and commitment that let them tied with their faith of salvation. Modern man is also in the same scenario of Vladimir and Estragon. Thus, the whole play can also be applied while analyzing the beliefs and commitments of Vladimir and Estragon to the commitments and beliefs of modern man.