Significance of Shaligram According to Hinduism

The Kali Gandaki or Gandaki River is one of the major rivers of Nepal and a tributary of the river Ganges in India. It is also called Krishna Gandaki in Nepal. However, one of the most important features of the river are the smooth, shining, black, egg-like stones that are found on the banks of Gandaki called Shaligram. These dark Himalayan fossils are believed to be somewhere between 140 to 165 millions years old.
Gandaki River Is An Important River For Hindus For Several Reasons:
It is here that Valmiki Rishi wrote the great epic, Ramayana. The ancient Valmiki Ashram still exists today and is a place of pilgrimage. Believed to be the birthpalce of Luv and Kush, the two sons of Lord Ram and Sita.
The hermitage also landmarks the ‘Falahar” (eating place) of Sita. Ashwamedh horse was believed to be tied here. The river is mentioned in the epic of Mahabharata.Its evolution is described in Shiva Purana, Kumarakhand and in the chapter of the killing of Shankachuda. Also known as shilas, these stones are revered and worshiped by Hindus as manifestations of Lord Vishnu himself. It is believed that Saraswati cursed Lakshmi in anger once which changed Lakshmi into a tulsi plant and forced her to live on earth forever.

Vishnu intervened and modified the curse, saying Lakshmi would remain on earth as tulsi until the river Gandaki flowed from her body. In the meanwhile, he would stay by the riverside in the form of a stone until he can take her back to His abode. It is for this reason that the tulsi plant and shila deities are always worshiped together as Lakshmi and Vishnu. 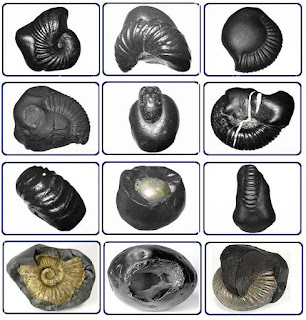 Each Shaligram piece is unique and they are worshiped according to the markings and shape of the stone. Some stones resemble Vishnu’s paraphernalia such as chakra, lotus, conch, mace. Shaligram stones come in dfferent colors such as red, blue, yellow, green and black. Of these, the yellow, blue and black varieties are considered more sacred. The yellow and golden-colored Shaligrams are considered most auspicious and are believed to bestow great wealth and prosperity on its worshipers.
Shaligrams of Different Shapes are Often Associated with Different Avatars or Incarnations of Vishnu and Believed to Bring Different Energies with Them when Worshiped, Such as:
Matsya: Incarnation of Vishnu in the form of fish. It bestows the worshipper with peaceful environment, austerity and philanthropy.
Kurma: Incarnation of Vishnu in the form of Tortoise. The worshiper gets immense perserverence, strong will power, patience, wealth and happiness in his life.
Varaha: Incarnation of Vishnu in the form of Boar. Brings immense protection and removes negativity.
matsya linga
Narsimha: Incarnation of Vishnu in the form of half man and half lion. Instills fearless and success in all endeavors.
Vamana: Incarnation of Vishnu in the form of small dwarf. Brings immense strength to fight against all odds, evils and enemies.
Krishna: Worshiper of Krishna shaligram will earn a great respect and dignity in the society.
Varaha linga
Surya: Depicts Lord Vishnu himself. Brings the quality of the sun – to rule and to move continuously with brilliant radiance and strength. Gives happiness, popularity and material gains.
Shivlinga: Symbol of auspiciousness, brings health and peace. The worshipping of this shaligram increases the family harmony.
Mahalakshmi: Bestows the devotee with good health and wealth . Man can progress in business and service and spends his life happily, shields from loss. 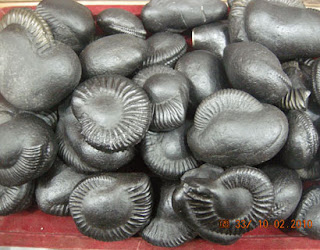 Ganesha: Removes obstacles and brings success in all undertakings.
Maha Vishnu: Brings eternal peace, contains influence of all ten incarnations and considered the most powerful Shaligram.
Lakshmi Narayan: A rare Shaligram, it is the direct representation of goddess Lakshmi and Lord Narayana. Brings immense wealth, protection and very good health.
Lakshmi Narasimha: Another very rare Shaligram, it represents goddess Lakshmi and Narasimha. Brings protection, good fortune, peace and all worldly comforts.
lakshmi narashimha linga
Shaligram Is Mentioned In The Following:
Lord Krisha refers to the qualities of Shaligram while giving discourse to Yudhistra.
In Padampurana, it is said that whatever homes you find a Shaligram, that home is better than places of pilgrimage.
In Skandpuran, Shiva has narrated the importance of Shaligram.
In Brahmvaivartpuran, Prakritikhand, it is said that wherever one finds Shaligram, Vishnu resides there.
Shaligram worship can be traced to the time of Adi Shankara through his works, especially in Taittiriya Upanishad and Brahma Sutras, suggesting that the use of Shaligram in the worship of Vishnu has been a well-known Hindu practice.
The largest and the heaviest Shaligram is located at Jagannath Temple while the main ISKCON temple in Scotland, called Karuna Bhavan is famous for housing the largest number of Shaligram Shilas outside of India.
The Shaligrams are usually hereditary and are passed down through many generations. Sale and purchase of Shaligram shilas are prohibited in Skanda Purana. 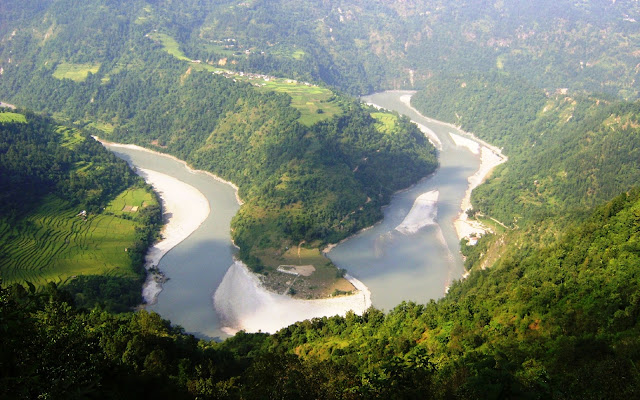